Somewhere early in 1971, two radio hams had the bright idea to form a hospital radio organisation on the Isle of Wight. They were Mike Cooley and Rob Mannion, Mike is still an active member today, but Rob moved on to other projects and remains the Editor of Practical Wireless.

So HBA, as it was referred to, was started, and there were many meetings and discussions about fundraising and broadcasting. To this day, Mike still has the very first income and expenditure account! We were joined by a professional broadcaster from Radio Solent – Bill Lyon who lectured us on broadcasting techniques. 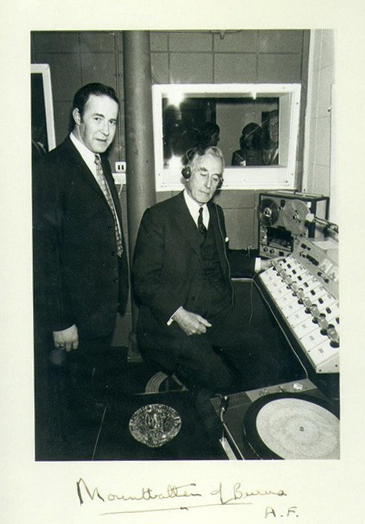 One day, in 1972, we were summoned by Bill Lyon to the old workhouse in the grounds of St. Mary’s Hospital and informed that this was going to be our radio station. The premises consisted of a front door, behind which was a corridor with two rooms one on each side. The rooms were made by a single thickness partition containing a window and a door. We decided that the right hand room would be the record library and the one on the left would be our studio/control room, and we would split that room into two. As we were all working during the day not much was done as we only had weekends to spare. We spent a lot of time talking about the merits of acoustic treatment, using egg boxes on the walls and ceilings, but we finished up with polystyrene tiles on the ceiling and that was the end of that story.

The apprentices at Plessey (now BAE Systems) in Cowes, took on the project to design and build our audio mixer. They went over to Radio Solent and looked at their Outside Broadcast mixer, came back and built a carbon copy for us. We now had an 8 channel audio mixer but nothing else. We split the room into two and things started to move forward with the aim to be ready by Christmas 1972. Come the New Year of 1973, Bill Lyon suddenly dropped a bombshell on us; Lord Louis (Earl Mountbatten of Burma) would be on the Isle of Wight early in February and would be coming in to open our Radio Station.

Panic ensued (Corporal Jones had nothing on us!). All we had was a mixer, two bare rooms and a few weeks to produce a working radio station.

By this time the number of people in HBA had increased, one of these people was John Barker, a BBC engineer from the Rowridge TV site, who had taken on the post of Station Engineer. The work started in earnest to build our first radio station, as by this time we had only 14 days to go before the grand opening.

It was not plain sailing by any stretch of the imagination, but we overcame each problem as they arose and on the 2nd February 1973 The Day arrived!

And so did we, all suited and booted. We had been briefed on the protocol of how to address a Lord of the Realm – we were ready.

Suddenly we realised that a vital piece of the broadcast system was missing – we were not connected into the hospital radio system, which meant that nobody in the hospital would be able to hear us. More panic ensued and an engineer was dispatched waving a soldering iron to make the final connection to the old north block – job done, it was now or never.

Lord Louis arrived and, after introductions, was taken into the studio by Bill Lyon, we all watched through the windows and listened on the monitor speakers, and exactly on time at 15:00 hours, the HBA made its very first broadcast.

Since then we have gone from strength to strength. We were connected to the other hospitals on the island, Frank James, Ryde, Fairlee, and Whitecroft. Sadly, today only St Mary’s is left. Over the years we have done many outside broadcasts from the wards, Cowes Week, the Agriculture Show at Northwood, and various shows from the Medina Theatre. We covered the memorial service from the dell at Carisbrooke Castle for Lord Louis, and the biggest event was the opening of the maternity ward in 1976 by the Duchess of Kent.

This broadcast coincided with the Agricultural Show, and required us to not only provide facilities from the the show site, but a lot more at St Mary’s. The Duchess arrived by helicopter, and did a walkabout, we followed every footstep giving a running commentary which entailed quite a lot of people with microphones complete with talkback facilities connected to a control point in the maternity block and then fed back to the main HBA control room where they were mixed in with the commentaries from the show. In 1985/6 the hospital fire officer condemned the old complex downstairs, so we rebuilt the studios upstairs where they are today.

We are currently refurbishing the whole complex again, to enable us to broadcast in stereo, and to update all of our equipment to the needs of the 21st century.